Sweeney Electrical supply a variety of high quality solar panels for commercial, industrial or domestic use. We supply, install and commission everything you need for your energy saving solar panel modules, including roofing installation kits, DC to AC inverters, and performance monitors.

We can design and adapt our solar panel kits to suit your existing or new-build project. Our solar panels comply with all building regulations and because we supply PV modules from 250w to 320w – you can achieve excellent efficiently in your system . All our Solar Panels modules go through rigorous due diligence checks to ensure correct agrément certification, accreditation and approvals, and country of origin checks.

How does solar power work? 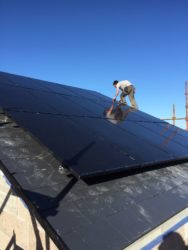 Energy from the sun

The sun provides an abundant, free source of clean energy in the form of natural light and warmth. It is possible to capture some of this free energy directly to convert sunlight into electricity using solar photovoltaic (PV) panels.

How does Solar Power work?

Solar PV systems convert light into electrical power. They range in size from a few square centimetres, for example on calculators and watches, to systems of hundreds of square metres made from interconnected modules that form an array. Photons in sunlight hit the solar panel and are absorbed by semiconducting materials, such as silicon. Electrons (negatively charged) are knocked loose from their atoms, allowing them to flow through the material to produce electricity. Due to the special composition of solar cells, the electrons are only allowed to move in a single direction. An array of solar cells converts solar energy into a usable amount of direct current (DC). The DC is carried through wiring to an inverter, which converts the current to mains AC (alternating current) which is connected to the property’s main electricity supply.

Solar PV systems are made up of modules, each typically around 1m x 1.7m. Solar PV systems can be designed to fit virtually any size and shape of roof or can be mounted on frames at ground level. Solar PV can also be mounted vertically and horizontally allowing the system to form part of the wall and roof structures in new properties, although performance will be reduced with these tilts.

The ideal installation for PV Modules is facing due south at a pitched angle of between 30° and 40° from the horizontal. This yields the best overall annual performance. Installations facing anywhere to the south of due east and due west are feasible, although output will be reduced. Installation is not recommended on roofs facing north.

What do kWp and kWh mean?

Solar electricity systems and modules are given a power rating in kilowatts peak (kWp). This is the electrical power which is generated at standard test conditions (Irradiance 1000W/m2, Air Mass 1.5, Cell Temperature 25 degrees).

The total amount of electrical energy the system actually generates in a year is measured in kilowatt hours (kWh). This will depend on the system’s orientation, shading and location, as well as the size of the system (in kWp) that you have installed.

A system which is un-shaded, south facing and with a tilt of around 30-40° will generate around 850kWh/kWp per year. The average home uses 4800kWh of electricity per year on lights and appliances. However, an energy efficient home using A rated appliances could use considerably less than this.

Each installation will generate differing amounts of kWh over a year. You can see the best roof example

The chart above shows a typical seasonal spread of energy generation for an average system of 2.2kWp facing south. The winter months generate significantly less electricity compared to the summer months.

The amount of electricity generated by a Solar PV system can also vary depending on where you live in Ireland.

Solar PV arrays are made up of modules of about 1.65m2 area which allows most available roof shapes to be accommodated. For example a 3kWp system could comprise 12 modules taking up an area of 20m2 and will generate roughly 2550kWh per annum.

Any shadows on a single module may reduce the performance of the whole array as all the modules are connected. A system can tolerate some shading early or late in the day without much reduction of overall output but it should not be shaded between 10am and 4pm. Trees, chimneys, TV aerials/dishes and vent pipes are all common causes of shading and should be accounted for before any installation. Micro-Inverters and Optimisers are products which can help reduce the effect of shading on a system. PV systems do not require direct sunlight and generate some electricity on cloudy days. Typically in December systems may generate around 25% of the energy they yield in July.

Connecting to the grid

The vast majority of systems are installed in properties with an existing mains electricity supply.

The Solar PV supply feeds into your existing system and the electricity generated is either used in your house or is exported to the grid, depending on how much you are using at the time. In the event of a power cut grid-connected inverters automatically switch off to protect any engineers working on the lines to repair them. Before connecting a PV system the installer will inform ESB Networks, they are responsible for managing the electricity grid in your area. 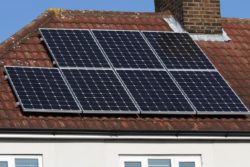 Very little maintenance is required if a well designed Solar PV system is installed properly. Modules should be checked periodically for obstructions such as leaves, excessive dust/dirt or bird droppings. Build up can generally be cleared by using a water hose or by a heavy rain shower. Use of a pressure washer or detergents is NOT recommended and most build up is cleared naturally by rainfall. Specialist solar panel cleaning companies may be available.

Trees and vegetation may grow and cause shade to fall on the module array. This will adversely impact system performance and periodic pruning may be required to ensure that system performance remains optimal.
You can expect them to operate for 25 years or more, although the inverter may need replacing during the lifetime of the modules. Once fitted, your installer should leave written details of any maintenance checks that you should carry out from time to time to ensure everything is working properly. This should include documentation covering the main inverter fault signals and key troubleshooting guidance.

System guarantees may vary: manufacturers’ performance guarantees on modern solar PV modules typically last up to 25 years. Standard inverter warranties are up to 10 years but extensions to this are often available. Installers may also offer their own warranties to cover their work.